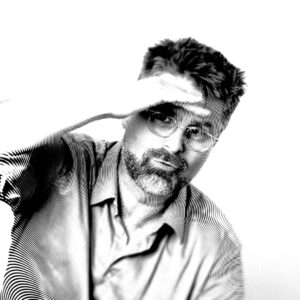 There are two types of taxi drivers in Berlin. There are those lurking in wait and those hunting – I was a night hunter.

Upon my arrival from Bosnia, I had all sorts of low-wage jobs. I worked on assembly lines mostly, getting paid by the hour. This is what I did for the first couple of years in Berlin. Then I thought, “What do I do now?” I tried to study, but somehow it didn’t work out, plus I didn’t have the nerves for that kind of thing, however somehow I had the nerve to learn by heart the names and locations of around 9500 streets – there were no gps or gmaps back then. So I got a cab driving license. In the spring of 1994 I started working as a taxi driver, which was a big upgrade. All of a sudden you had a big Mercedes under your ass, you had freedom, and you made your money the way you wanted to make it.

It was one of these episodes that belongs to my  Berliner “dirty nightlife”. It was an early evening, and I wanted to get laid. And with a cab you are very mobile. This is the trick. You go everywhere and you know where the places are where you can buy sex, if you are so inclined and feel the urge.

One of the places you could pay women was the neighborhood around Einemstraße, near Nollendorfplatz in the district of Schöneberg. In German it‘s called “the strich” – the street walkers’ zone, where day and night mostly East European sex-workers “walked the line”. Now they are gone. I think even the name of the street was partially changed. But back then I would drive by especially to see this one girl, long-legged, blonde, beautiful. Of course all these girls made themselves look hot. But this one was “special”. There was something about her that struck my fancy, something wild and natural.

I had been observing her for ages. For months I  didn’t dare approach her. Whilst she walked looking for her customers, I kept cruising-by whilst chasing mine. And I fantasized about holding her in my arms.

Don’t get me wrong. I never was a macho guy for whom this sort of thing came naturally. Up until then, I didn’t even dare to go to prostitutes . I was shy that way. In Bosnia I only ever had a few embarassing  sexual experiences. But there was something about driving a cab that encouraged me, made me think my fantasies could be realized, my dreams lived out.

It was also a question of money. Rarely did I have a big sum of money on me to blow. But then one day, cruising around Nollendorfplatz, a queer who somehow evidently liked me, gave me an eighty D-mark tip. Wow. A small hunter bagging a big prey.  What to do with this unexpected sum of money? I knew immediately. I drove over to Einemstraße, and there she was – the woman of my dreams.

Of course, before you do it, you develop all sorts of dreams about the girl you are about to “do it” with. By the time you actually make it, you have already gone through the whole erotical routine a hundred times without even touching her.  But once in real time and space you get close to her, it doesn’t look quite like how you expected it. You set certain expectations in your head which are impossible to meet.

I pulled up to her and rolled down the window.

I told her to step inside, and so she sat down next to me in the car. And then me all of a sudden getting timid, as if having stage fright.

“Where do you want to do it?” she asked.

I mean, it didn’t feel romantic at all. From the very get-go it was very business-like, like, “You want to fuck? Give me your money and fuck yourself.”

She offered to take me to a room in a hotel that charged by the hour, but this would have meant more money, more money than I had.

So I was like, “Okay, let’s do it in the car,” and she gave me directions to a dead-end street nearby.

It was dark and she started touching me, but it immediately became unnatural and I couldn’t really get it up, because it was not the right setting. You know, the expectations are one thing, the reality quite something else. Somehow, though, we started getting somewhere.

Then she told me I was supposed to turn around and take her doggy style on her seat. She didn’t even bother to get undressed. She had a hole there in her underwear, everything already sorted out.

The thing is I am sitting in my driver’s seat, and she turns around, and I try getting over to her and take position. And if you recall, in the taxis there are all the controls for the lights on the roof above the driver’s head, and all of a sudden, just as I was getting ready to mount her, I clumsily hit all the light buttons. The lights went on in the cab, like on a big stage show. There we were for all to see, and my cock reciprocated by pulling a disappearing act.

“Well,” she said, giving me a sleazy look. “What are we going to do now, mein Lieber?”

Embarrassed, I slumped  back down in my drivers’ seat and said, “Just give me a moment to relax please. Let me play some music first.

There are two types of taxi drivers in Berlin. There are those lurking in wait and those hunting – I was a night hunter.

Subscribe to receive our latest blog posts directly in your inbox!